< Back to all resources

Speeding Multi-Platform Releases for Industrial IoT with Conan and Artifactory 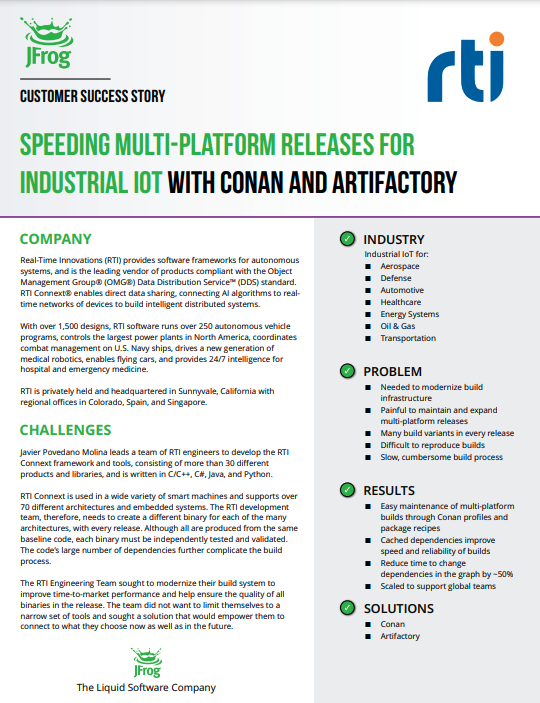 RTI is the leading vendor of products compliant with the Object Management Group® (OMG®) Data Distribution Service™ (DDS) standard. RTI is privately held and headquartered in Sunnyvale, California with regional offices in Colorado, Spain, and Singapore.

Javier Povedano Molina leads a team of engineers at RTI which is responsible for the build and automation tools for the RTI Connext framework. RTI Connext consists of more than 30 different products and libraries and is written in C, C++, C#, and Java. The build tooling is primarily written in Python.

RTI Connext is used in a wide variety of smart machines and supports over 70 different architectures and embedded systems. The RTI development team, therefore, needs to create a different binary for each of the many architectures, with every release of RTI Connext. Although all are produced from the same baseline code, each binary must be independently tested and validated. The code’s large number of dependencies further complicate the build process..

The RTI Engineering Team sought to modernize their build system to improve time-to-market performance and help ensure the quality of all binaries in the release. The team did not want to limit themselves to a narrow set of tools and sought a solution that would empower them to connect to what they choose now as well as in the future.

Thank You For Downloading

Stay Up to Date